The Vision Sciences Society is honored to present Gerald Westheimer with the 2021 Ken Nakayama Medal for Excellence in Vision Science.

The recipient of the Ken Nakayama Medal receives this honor for high-impact work that has made a lasting contribution in vision science in the broadest sense. The nature of this work can be fundamental, clinical or applied. 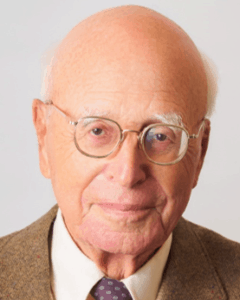 Gerald Westheimer received his PhD degree in Physics: Physiological Optics at Ohio State under Glenn Fry in 1953 after completing optometry studies at the Sydney Technical College, a B.Sc. in mathematics and physiology at the University of Sydney and several years of private practice in Sydney, Australia. His post-doctoral education included the Nerve-Muscle Program at Woods Hole under Steven Kuffler, and a year at the Cambridge Physiological Laboratory, where he collaborated with Fergus Campbell and John Robson on the eye’s accommodative mechanism and attended E.H. Linfoot’s course on Fourier optics. After teaching optics and vision science in the optometry schools successively of Houston, Ohio State and Berkeley he was appointed as Professor of Physiology in Berkeley in 1967 and, when the Department of Molecular and Cell Biology was formed in 1987, as founding Head of its Division of Neurobiology. In 1994 he became Professor of the Graduate School at Berkeley as well as adjunct professor in the Laboratory of Neurobiology at the Rockefeller University, New York.

There are few facets of the visual system that Gerald Westheimer has not been involved in during his long career as active experimentalist, theoretician, scholar of the history of vision science, laboratory head, mentor and sponsor of independent research by post-doctoral and visiting scholars from around the world. His recognitions include election to the Royal Society of London and its Ferrier Lecture, Fellow of the American Academy of Arts and Science, Honorary Member of the Royal Society of NSW, the Tillyer Medal of the Optical Society, Proctor Medal of ARVO, Prentice Medal of the American Academy of Optometry, International von Sallman Prize in Ophthalmology, Barry Collins Medal of the Australian Optometric Association, Glenn Fry Medal of Ohio State University, several honorary degrees and Membership of the Order of Australia.

From his experiences in the optometry clinic Gerald formed an abiding interest in the eye’s optics and image formation, resolution and acuity. This led to his progressively deeper fascination with in the spatial sense of the eye in two and three dimensions, stereopsis and ocular motility. He used the research methodologies of optics, psychophysics, alert primate single unit recordings and right from their advent in the 1950’s, electronic computers. Rigorous training in mathematics and physics in Sydney enabled him to engage in the areas of systems theory and Fourier optics as they emerged, and to pioneer their application in visual science. Motivated primarily by an interest in and curiosity about human vision rather than the practice of particular scientific disciplines, Gerald concluded that, much as the analysis of visual phenomena should proceed initially by applying the knowledge and principles of the physical sciences, full understanding cannot be reached solely through that route but needs guidance from knowledge derived from observers’ awareness. With this approach, he made seminal discoveries in understanding the optics of the eye, binocular vision, spatial vision, eye-movements, learning and visual illusions. One example of his many contributions is his discovery how humans are able to discern small changes in the relative position of a stimulus that are an order of magnitude smaller than the smallest foveal cones in the retina. He termed this remarkable ability “hyperacuity” – a term that is now widely used, and elucidated many of its properties. In this, and in many other ways he shaped the growth of vision research. Vision science has benefited in lasting ways from Gerald’s research discoveries, his acumen, his scientific rigor, and his commitment to getting it right.