The Vision Sciences Society is honored to present Dr. Marisa Carrasco with the 2021 Davida Teller Award 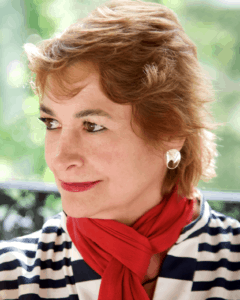 Marisa Carrasco investigates visual perception and attention, using human psychophysics, neuroimaging, neurostimulation, and computational modeling in order to study the relation between the psychological and neural mechanisms involved in these processes. Her research has revealed how attention modulates perceptual performance and alters appearance in a variety of visual tasks. Marisa grew up in Mexico City and earned her Licentiate in Psychology, specializing in experimental psychology, from the National Autonomous University of Mexico (UNAM), where she graduated summa cum laude. Marisa then obtained her MS and PhD in psychology, specializing in cognition and perception, from Princeton University, where she received the highest scholarly excellence award, the Jacobus Honorific Fellowship. She became an Assistant Professor of Psychology at Wesleyan University in 1989. While at Wesleyan Dr. Carrasco received an NSF Young Investigator Award and an American Association of University Women Fellowship. She joined NYU in 1995 as an Associate Professor and was promoted to Professor of Psychology and Neural Science in 2002. She served as chair of the NYU Psychology Department from 2001-2007. NIH and NSF have continuously supported Carrasco’s research at NYU. Professor Carrasco received a Guggenheim Fellowship and a Cattell Fellowship and was named a fellow of the American Psychological Society and has been elected to the National Academy of Sciences (2021); at NYU, she has been Collegiate Professor since 2007 and was named Julius Silver Professor of Psychology and Neural Science in 2019. Among her many other contributions to the vision sciences community, Marisa Carrasco has served as president of both the Vision Sciences Society and the Association for the Scientific Study of Consciousness and as a senior editor of two scientific journals, Journal of Vision and Vision Research.

Marisa Carrasco has had a profound impact on the field of vision science and attention through her multi-disciplinary research and through her mentorship activity. She is well-known as a dedicated teacher and mentor of undergraduate students, graduate students and post-doctoral fellows. This is in part evidenced by her receipt of the NYU award for excellence in postdoc mentoring in 2018.

Marisa forged her research career in an era when the field of vision science had few women. Through her efforts she not only advanced her own research; she has also been an invaluable and generous role model for the many students she has taught and mentored through the years. With this award, VSS recognizes Professor Marisa Carrasco’s outstanding research and thanks her for being a wonderful scientist, mentor, and colleague.