The Vision Sciences Society is honored to present Edward Adelson with the 2020 Ken Nakayama Medal for Excellence in Vision Science.

The recipient of the Ken Nakayama Medal receives this honor for high-impact work that has made a lasting contribution in vision science in the broadest sense. The nature of this work can be fundamental, clinical or applied. 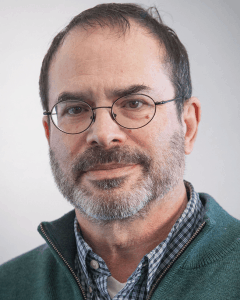 Edward ‘Ted’ Adelson received his B.A. in Physics & Philosophy in 1974 from Yale University, followed by a PhD in Experimental Psychology from the University of Michigan (1979). After a postdoctoral position at NYU he became a research scientist at RCA labs. Ted then joined the faculty at MIT in 1987, first in the Media Lab, before moving to the department of Brain & Cognitive Sciences in 1994. Currently, Ted is the John and Dorothy Wilson Professor of Vision Science at MIT, in the Department of Brain and Cognitive Sciences, and in the Computer Science and Artificial Intelligence Laboratory (CSAIL). Ted has received many prior awards and is a Member of the National Academy of Sciences.

Over his career Ted has made fundamental and wide-ranging contributions to the scientific study of vision and perception. His work is the stuff of textbooks and perception courses, and the illusions he has discovered have inspired and beguiled researchers and the general public alike. Indeed, Ted is able to bring visual phenomena to a highly purified state, so that his demonstrations will remain standard references for generations to come. More generally, Ted’s work bridges across the full range of vision science, and includes seminal contributions to theory, psychophysics, computational modelling, and neurophysiology. From low-level mechanisms of retinal adaptation, to the motion energy model, texture processing, lightness perception, pyramid decompositions, the plenoptic function, ‘things’ vs ‘stuff’ and material perception, practically everything Ted has done has opened new avenues of investigation and understanding in ways that have helped define the field. He is also known as an amazing supervisor, and many of his trainees have themselves gone on to make fundamental contributions to our understanding of vision. Ted Adelson easily meets, several times over, the Nakayama Award’s criterion of having made exceptional, lasting contributions to vision science.