The Vision Sciences Society is honored to present Concetta Morrone with the 2019 Ken Nakayama Medal for Excellence in Vision Science.

The winner of the Ken Nakayama Medal receives this honor for high-impact work that has made a lasting contribution in vision science in the broadest sense. The nature of this work can be fundamental, clinical or applied. 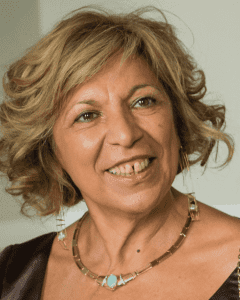 The brain architecture underlying our incredibly powerful and versatile visual system is best unravelled using multiple parallel approaches, including development, computational modelling, psychophysics, functional imaging and electrophysiology, in a truly interdisciplinary manner. This is the approach Concetta Morrone has adopted to understand how we segment visual scenes into functional objects, how the visual brain dynamically interacts with the motor system in crucial moments, such as eye-, head- and body-movements, how the brain plastically reorganizes itself for optimal visual processing during development and neuronal diseases. Concetta, in close collaboration with David Burr, has contributed to all these fundamental questions, introducing new concepts and verifying them quantitatively. There are various examples of this approach, including the reorganization of spatio-temporal receptive fields to retune the retinotopy of associative cortex on each saccade to mediate perceptual stability; the reorganization and change of specialization of associative cortex when primary visual pathways are damaged in hemianopia or blind-sight; the dynamic selection of salient spatial features by the Local Energy Model; and how the developing brain controls and calibrates dynamic reorganization and its residual capability in adulthood.

Concetta Morrone graduated in with a degree in Physics from the University of Pisa in 1977 and trained in Biophysics at the elite Scuola Normale Superiore from 1973 to 1980. Following research positions at the University of Western Australia, the Scuola Normale Superiore and the CNR Institute of Neuroscience in Pisa, she was appointed Professor of Psychophysiology in the Faculty of Psychology at the Università Vita-salute San Raffaele (Milan) in 2000. Since 2008, she has been a Professor of Physiology in the School of Medicine of the University of Pisa. In 2014 Concetta was elected a member of the Accademia dei Lincei, the Italian equivalent of the National Academy of Sciences or the Royal Society of London. In 2014 she was awarded an ERC-IDEA advanced grant, a distinction of excellence in Europe.