The Vision Sciences Society is honored to present George Sperling with the 2018 Ken Nakayama Medal for Excellence in Vision Science.

The winner of the Ken Nakayama Medal receives this honor for high-impact work that has made a lasting contribution in vision science in the broadest sense. The nature of this work can be fundamental, clinical or applied. The Medal is not a lifetime career award and is open to all career stages. 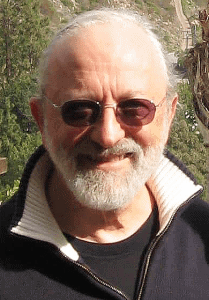 Department of Cognitive Sciences, Department of Neurobiology and Behavior, and the Institute of Mathematical Behavioral Sciences, University of California, Irvine

Five encounters with physical and physics-like models in vision science

Two early concepts in a vision course are photons and visual angles:

1. Every second, a standard candle produces 5.1×1016 photons, enough to produce 6.8×106 photons for every one of the 7.7×109 persons on earth–a very bright flash (68,000*threshold) if delivered to the pupil. Obviously, photons pass seamlessly through each other or we’d be in a dense fog. And, the unimaginably large number of photons solves the ancients’ problem: How can the light from a candle produce a detailed image behind a tiny, ¼ inch pupil that captures only an infinitesimal fraction of the meager candlelight reflected off relatively distant surfaces?

3. A simply dynamical system of a marble rolling under the influence of gravity in a bowl (filled with a viscous fluid) whose shape is distorted by the covariance of the images in the two eyes. The marble’s position can represent the vergence angle of horizontal, vertical, or torsional vergence of the eyes, or of binocular fusion; the bowl’s shape represents the bistable nature of these processes (Sperling, 1970).

4. A simple RC electrical circuit–a capacitor that stores an electrical charge that leaks away through the resistor–illustrates exponential decay. When the resistance is allowed to vary, it represents shunting inhibition in a neuron. A feedforward shunting inhibition circuit models the compression of the 106 range of visual inputs into the approximately 30:1 useful range of neural signals, and also the concurrent changes in visual receptive field structure (Sperling and Sondhi, 1968). A constant noise source after the range compression produces a S/N ratio inversely proportional to the average input intensity, i.e., a Weber Law (Sperling, 1989).

5. A similar feedback shunting-gain-control system efficiently models mechanisms of top-down spatial, temporal, and feature attention. Example: Reeves and Sperling, 1986: A simple 3 -parameter model of the shift of visual attention from one rapid stream to an adjacent stream of characters (an attention reaction-time paradigm) accurately accounts for over 200 data points from variants of this procedure.

George Sperling attended public school in New York City. He received a B.S. in mathematics from the University of Michigan, an M.A. from Columbia University and a Ph.D. from Harvard, both in Experimental Psychology.

For his doctoral thesis, Sperling introduced the method of partial report to measure the capacity and decay rate of visual sensory memory, which was renamed iconic memory by Ulrich Neisser. To measure the information outflow from iconic memory, Sperling introduced post-stimulus masking to terminate iconic persistence, and confirmed this with an auditory synchronization paradigm: Subjects adjusted an auditory click to be simultaneous with the perceived onset and on other trials with the perceived termination of visible information. The interclick duration defined the duration of visible persistence.

Sperling’s first theoretical venture was a feed-forward gain control model based on shunting inhibition, formalized with a mathematician, Mohan Sondhi. It accounted for the change of visual flicker sensitivity with light intensity and for Barlow’s observation that visual receptive fields change from pure excitation in the dark to antagonistic center-surround in the light. Subsequently, Sperling observed that this same model, with internal noise following the gain control, also accounted for Weber’s Law. For binocular vision, Sperling proposed a dynamic, energy-well model (a pre-catastrophe theory “catastrophe” model) to account for multiple stable states in vergence-accommodation as well as for Julesz’s hysteresis phenomena in binocular fusion. With Jan van Santen, Sperling elaborated Reichardt’s beetle-motion-detection model for human psychophysics, and experimentally confirmed five counter-intuitive model predictions. Shortly afterwards, Charlie Chubb and Sperling defined a large class visual stimuli (which they called “second-order”) that were easily perceived as moving but were invisible to the Reichard model. These could be made visible to the Reichard model by prior contrast rectification (absolute value or square), thereby defining the visual pre-processing of a second motion system. With Zhong-Lin Lu, Sperling found yet another class of stimuli that produced a strong motion perceptions but were invisible to both Reichard (first-order) and second-order motion detecting systems. They proposed these stimuli were processed by a third-order motion system that operated on a salience map and, unlike the first- and second-order systems, was highly influenced by attention. To characterize these three motion-detection systems, they developed pure stimuli that exclusively stimulated each of the three motion system. More recently, Jian Ding and Sperling used interocular out-of-phase sinewave grating stimuli to precisely measure the contribution of each eye to a fused binocular percept. This method has been widely adopted to assess treatments of binocular disorders.

Twenty five years after his thesis work, Sperling returned to attention research with a graduate student, Adam Reeves, to study attention reaction times of unobservable shifts of visual attention which they measured with the same precision as concurrent finger-press motor reaction times. Their basic experiment was then greatly elaborated to produce hundreds different data points. A simple (3-parameter) attention gating model that involved briefly opening an attention gate to short-term memory accurately accounted for the hundreds of results. Subsequently, Erich Weichselgartner and Sperling showed that the shifts of visual attention in a Posner-type attention-cued reaction time experiment could be fully explained by independent spatial and temporal attention gates. In a study of dual visual attention tasks, Melvin Melchner and Sperling demonstrated the first Attention Operating Characteristics (AOCs). Sperling and Barbara Dosher showed how AOCs, the ROCs of Signal Detection Theory, and macro-economic theory all used the same underlying utility model. Shui-I Shih and Sperling revisited the partial-report paradigm to show that when attention shifted from one row of letters to another, attention moved concurrently to all locations. Together, these attention experiments showed that visual spatial attention functions like the transfer of power from one fixed spotlight to another, rather than like a moving spotlight. Most recently, Sperling, Peng Sun, Charlie Chubb, and Ted Wright, developed efficient methods for measuring the perceptual attention filters that define feature attention.

Sperling owes what success he has had to his many wonderful mentors and collaborators. Not fully satisfied with these fifty-plus years of research, Sperling still hopes to do better in the future.