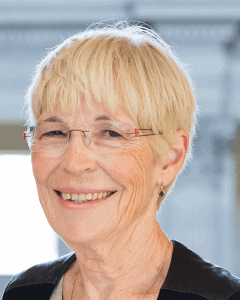 Vision in the context of natural behavior

Investigation of vision in the context of ongoing behavior has contributed a number of insights by highlighting the importance of behavioral goals, and focusing attention on how vision and action play out in time. In this context, humans make continuous sequences of sensory-motor decisions to satisfy current goals, and the role of vision is to provide the relevant information for making good decisions in order to achieve those goals. I will review the factors that control gaze in natural behavior, including evidence for the role of the task, which defines the immediate goals, the rewards and costs associated with those goals, uncertainty about the state of the world, and prior knowledge.

Mary Hayhoe is an outstanding scientist who has made a number of highly innovative and important contributions to our understanding of visual sensation, perception and cognition. She received her PhD in 1980 from UC San Diego and served on the faculty at the University of Rochester (1984 – 2005) and University of Texas at Austin (2006 – present). Her scientific career began with a long series of fundamental and elegant studies on visual sensitivity, adaptation and color vision. During this period, Mary was a well‐funded and internationally‐recognized leader in these areas of research; indeed, her work in these areas is still having an important influence.

She then made a dramatic shift in fields, leaving retinal and color psychophysics entirely. With this change, Mary Hayhoe and her colleagues became pioneers in developing a new research area that examines behavior in semi-naturalistic situations. Her research is not about the perceptual or motor system in isolation, but how these systems work together to generate behavior. At the time (the early 1990’s), there had been very few attempts to understand visual and cognitive processing in natural visual tasks. Mary and her colleagues were really the first to develop research methods for rigorously studying visual memory, attention and eye movements in natural everyday tasks (making a sandwich, copying block patterns, walking in cluttered environments etc.). Prior to this work most scientists believed that little of fundamental or general importance could come from working with such complex tasks, because so many neural and motor mechanisms are involved, and because of the difficulty of exerting sufficient experimental control. However, Mary recognized and beautifully exploited the potential of eye, head and body tracking technology, and of virtual‐reality technology, for rigorously addressing the problem of understanding perceptual and cognitive processing in natural tasks.

Mary Hayhoe is one of the founders and acknowledged leaders of a new field where there is much deserved emphasis on behavior in the real world. Her care and imagination are always evident, providing an admirable standard for young men and women alike. Her former graduate students and post‐doctoral researchers readily acknowledge that her mentoring, investment in their futures, and friendship played an important role in their development as scientists and critical thinkers.