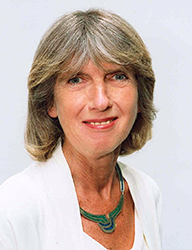 Janette Atkinson is a worldwide leader in research on human visual development. She has made major advances in an extraordinarily wide range of basic and clinical areas, collaborating throughout her career, with vision scientists, ophthalmologists, optometrists and pediatric neurologists. Her impact on the field has been immense, both directly through innovative research, and indirectly through her mentorship and personal support to her students and collaborators.

Her career began in Cambridge University where she set up and led one of the first ‘baby labs’, the Visual Development Unit at Cambridge and subsequently at University College London (UCL, University of London) and Oxford. She was the first to use Davida Teller’s method of forced-choice preferential looking to measure contrast sensitivity, initially in the first months of life of her own child (Nature 1974), and subsequently with novel VEP measures in newborns. Using newly devised behavioral and VEP/ERP methods, she demonstrated the onset of binocularity, orientation sensitivity, OKN, and fixation shift control of attention, leading to her pioneering neural model of cortical/subcortical interaction in early human development. Janette originated the use of photorefraction and videorefraction with infants, and led two unique population screening studies showing that spectacle correction of infants’ refractive errors could improve visual outcome, reducing strabismus and amblyopia by 4 years of age. Having used her methods of assessing cortical development with at-risk groups, particularly infants born preterm and children with Williams syndrome, she has moved on to studying global processing, leading to her influential idea of ‘Dorsal Stream Vulnerability’ in many children with genetic developmental disorders, perinatal brain injury and CVI (Cerebral Visual Impairment). She argues for the continuity and associations in dorsal stream development between global motion and attentional, spatial, visuo-cognitive, and visuomotor development, and has devised assessments for this whole area in both typical and atypically developing children.

She has been a mentor and advisor, giving generous support to many students, colleagues and collaborators, both scientists and clinicians, and a role model showing young female scientists that the highest levels can be reached while sustaining close family life with her four children. More widely, she has been a tireless advocate for women’s scientific careers, as a member of ARVO’s Equality and Diversity Committee and through the UK’s Athena SWAN scheme for advancing women’s careers in science. She led UCL’s successful bid for a SWAN Charter Award, one of the first 12 UK universities to achieve this award.

In recognition of her internationally acclaimed research record, she has been elected as a Fellow of the British Academy, the Academy of Medical Sciences and the Academia Europaea.

Visual science as a key to typical and atypical development

My research on vision development has always been inspired by the prospect of understanding and helping the development of vision in infants and children with clinical problems, including developmental disorders such as autism, Downs syndrome and cerebral palsy.  Initial advances in the basic science of human visual development, since the first measurements of infants’ acuity and contrast sensitivity, have led directly into applications for identifying and assessing  paediatric  ophthalmological and neurodevelopmental  visual disorders.

I will briefly review a few diverse highlights of our own translational work in the Visual Development Unit, and suggest unanswered questions arising from our current knowledge:

My research has started to answer questions about both the typical and atypical developing visual brain, but it has raised many more unanswered ones. For example , we still do not know the critical period of plasticity for many of the visual networks which develop in the first few years of life. If we understood the epigenetic factors controlling early visual brain growth and plasticity, then this might lead to success in future treatment of paediatric visual disorders.  My hope is that some of these questions will be answered by future vision researchers (both women and men !) coming into the ‘developmental arena’ from a wide range of different disciplines.