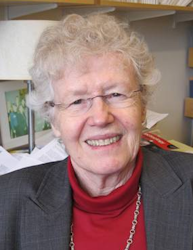 Dr. Mary Potter, better known as Molly Potter, a professor of Psychology at the Massachusetts Institute of Technology, is the winner of the Davida Teller Award 2014. Potter is known for her fierce intellect, her deeply original experiments, and her fundamental discoveries about human cognition.

A few highlights: Already in 1975, Potter discovered that subjects can report conceptual information about a pictured object faster than they can name it, showing that it is not necessary to access the verbal label to understand the meaning of an object. Later she discovered that complex visual scenes can be perceived and understood much faster than anyone had previously recognized. She showed that subjects can identify the gist of a scene from an astonishingly brief presentation. Here Potter made innovative use of rapid serial visual presentation (RSVP).

Potter has a long list of scientists that consider her as their mentor, many of them leading scientists themselves now. For example, with Judith Kroll, Molly showed that people can easily read at 12 words per second, but their later memory will be poor. In Molly’s lab, Helene Intraub discovered repetition blindness and Nancy Kanwisher and Daphne Bavelier developed methods to study it. Marvin Chun, and later Mark Niewenstein and Brad Wyble, investigated and modeled the attentional blink.

What is the shortest presentation duration at which a named scene or object can be recognized above chance, when the scene is presented among other pictures in a short RSVP sequence? In a recent study (Potter, Wyble, Hagmann, & McCourt, 2014) presentation durations were blocked and dropped slowly from 80 ms to 53, 27, and 13 ms. Although d’ declined as duration shortened, it remained above chance even at 13 ms, whether the name was given just before or just after the sequence, and whether there were 6 or 12 pictures per sequence. A forced choice between two pictures at the end of each sequence was reliably above chance only if the participant had correctly said yes. New replications varied the method but gave similar results: 1) using grayscale sequences; 2) randomizing all the nontarget pictures across all trials, for each subject; 3) randomizing durations instead of blocking them; and 4) using a different set of pictures with superordinate or basic object names for targets. Whether these results indicate feedforward processing (as we suggest) or are accounted for in some other way, they represent a challenge to models of visual attention and perception.