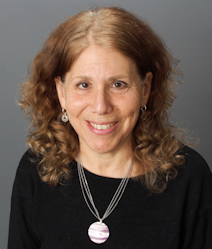 Dr. Eileen Kowler, Professor at Rutgers University, is the inaugural winner of the Davida Teller Award. Eileen transformed the field of eye movement research that eye movements are not reflexive visuomotor responses, but are driven by and tightly linked to attention, prediction, and cognition.

Perhaps the most significant scientific contribution by Eileen was the demonstration that saccadic eye movements and visual perception share attentional resources. This seminal paper has become the starting point for hundreds of subsequent studies about vision and eye movements. By convincingly demonstrating that the preparation of eye movements shares resources with the allocation of visual attention, this paper also established the validity of using eye movements as a powerful tool for investigating the mechanisms of visual attention and perception, which provides a precision and reliability that is otherwise difficult, if not impossible, to achieve. This work forms the basis of most of the work on eye movements that is presented at VSS every year!

Before her landmark studies on saccades and attention, Eileen made a major contribution by showing that cognitive expectations exert strong influences on smooth pursuit eye movements. At that time smooth pursuit eye movements were thought to be driven in a machine-like fashion by retinal error signals. Eileen’s wonderfully creative experiments (e.g., pursuit targets moving through Y-shaped tubes) convinced the field that smooth pursuit is guided in part by higher-level visual processes related to expectations, memory, and cognition.